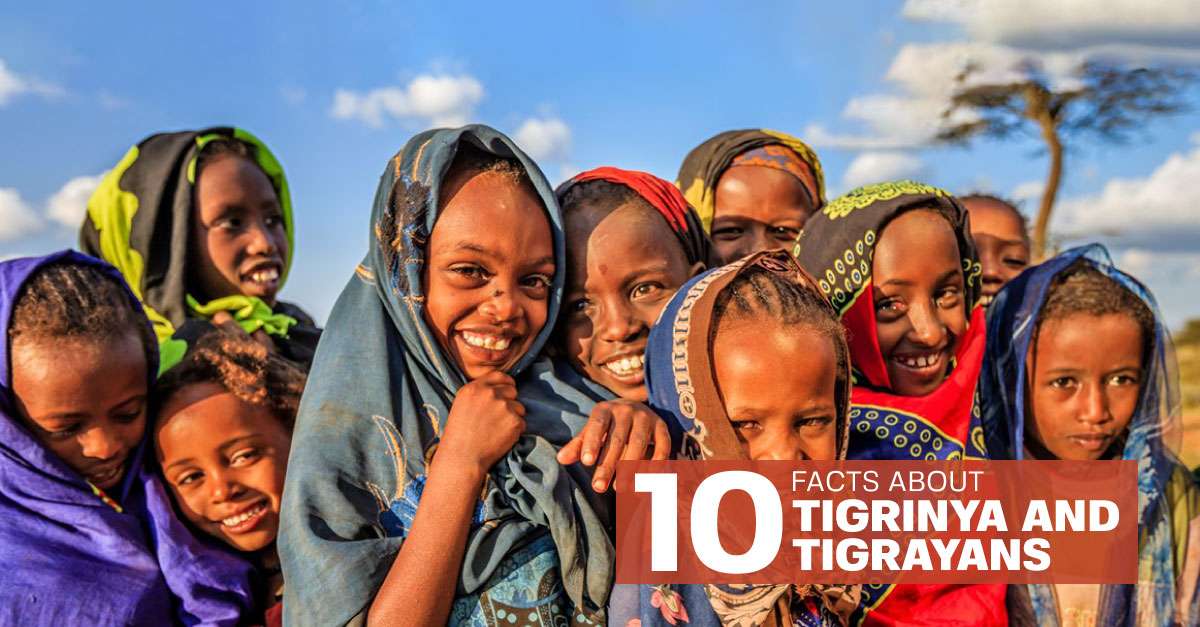 Tigrinya is one of the world’s most unique and interesting languages.  It is the primary language of the Tigrinya people, with about 6.9 million speakers in Eritrea and Northern Africa.  Many Africans living in surrounding countries also speak it is as a secondary language.

In this guide, we will take a closer look at Tigrinya and the countries where it is spoken.  We’ll also explain why understanding Tigrinya is essential for doing business in Eritrea, Ethiopia, and other countries in Northern Africa.

Tigrinya is an old language with a history that can be traced back to the 13th Century, during the Zagwe dynasty.  It is different from most other languages used in the region because it has phrasal verbs. The word order places the main verb first in the sentence.

10 Facts About Tigrinya and Eritrean Culture

The Tigrinya account for over 50% of Eritrea’s population.  They mostly live in the Eritrean highlands and the provinces of Akeleguzay,  Hamasien, and Seraye.

2. There are many languages spoken in the region

In addition to Tigrinya, it is common for people to speak Arabic and English.

3. There are two dominant religions in the region

Most people living in the region are Christian or Muslim.  Both religious groups live together peacefully and often come together during cultural celebrations.

4. Many people in this region only eat vegetables

Some Eritreans and Ethiopians cannot afford meat, so they eat meals like Shiro (a chickpea porridge) or alicha birsen (a lentil curry).  This is starting to change as the region is becoming more affluent thanks to strongly growing economies.

5. Tigrinya have historically been settled agriculturists

Agriculture plays an important role in the region.  There are many successful farmers who grow a wide variety of crops.

6. Most of the population is in rural locations

Unlike some other parts of Africa, there hasn’t been a flow of people towards the cities.  Most people are happy to remain in rural locations and enjoy a relaxed lifestyle.

7. The staple diet revolves around injera

One of the most important foods is injera — a flat, spongy bread that is made from local grains.  It is often combined with various stews and sauces that contain plenty of vegetables.

8. The Tigrinya are very artistic

The Tigrinya are very adept at making craft goods including coffeepots, baskets, arts and many other items.  These items are often popular export products.

9. The Tigrinya have large families

Traditional Tigrinya communities have a concept called enda, which is a large group of people that claim common ancestry.  This helps them maintain contact with their many relatives and enjoy large family gatherings.

The Italians began to colonise parts of Eritrea where the Tigrinya lived in the late 19th-Century.  This led to some urbanization and industrialization of the region. The British were present in the region in the 20th-Century.

The region where Tigrinya is spoken is one of the fastest growing parts of Africa.  Although many people are still living in small family-run farms, there are some strong export industries emerging throughout the region.

The strongest-growing industries include agriculture, food processing, building, mining, dairy farming, manufacturing, tourism, energy, and finance.  The success of these industries has led to both Eritrea and Ethiopia experiencing strong GDP growth. Eritrea has experienced positive GDP growth for the past decade, ranging from 2.2% to 8.7%.  Ethiopia has been even better, recording growth between 8% and 11.4% during the past decade, with a number of years experience double-digit growth.

The major export partners of businesses in this region include Italy, China, Saudi Arabia, Sudan, and the United Kingdom.  Ethiopia also sends many goods to Switzerland, the United States, Germany, and the Netherlands. Economists expect the region to continue performing well in the coming years.

The importance of understanding Tigrinya

If your business is operating in Eritrea or Ethiopia, it will be essential to have access to an accurate and reliable Tigrinya translation service. This will allow you to work effectively with various stakeholders, including government departments, customers, suppliers, and other businesses.  Translation services will make completing paperwork, negotiating with clients, and creating new business deals much simpler.

Future Trans can provide you with all of the translation services you require.  Our experienced team will ensure you have quick access to the translations you require to become established in the Tigrinya region.  We often translate documents for businesses located in Ethiopia and Eritrea and understand the level of accuracy and efficiency that is necessary.  Future trans can also help you create Tigrinya translations for manuals, articles, and brochures for your business.

previousThe Essentiality Of Translation At The World Cup

nextAFRICAN STARTUPS AND THE BOOM IT BIDS