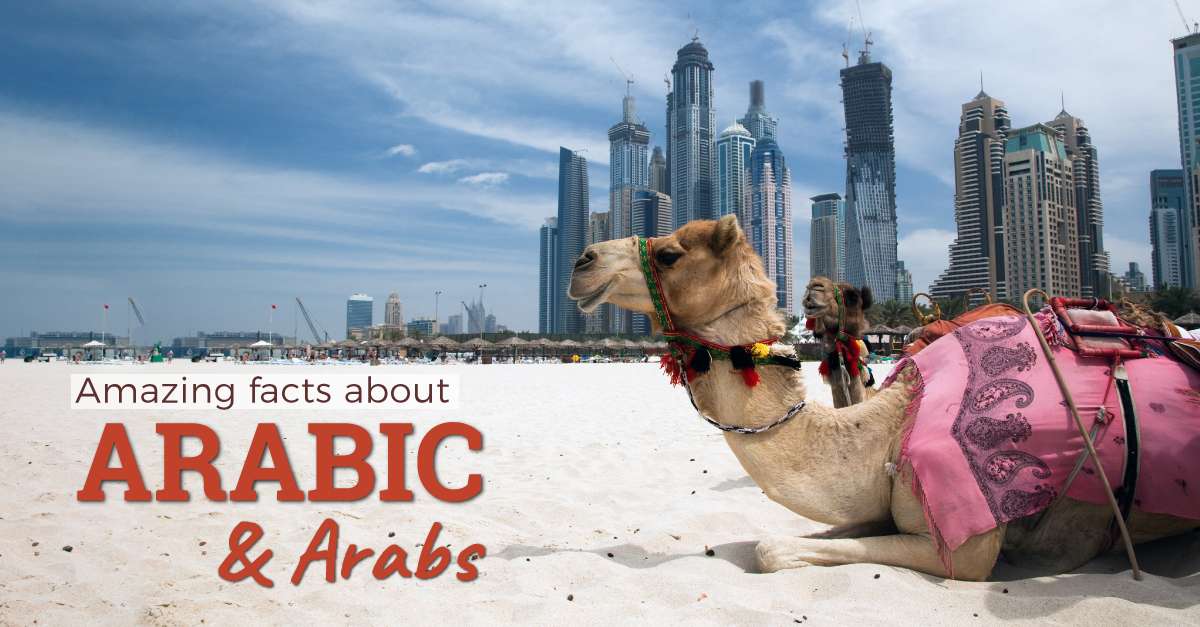 Arabic is a fascinating language with a history that dates back centuries.  It is also a very popular language, with more than  300 million native Arabic speakers around the world, mostly in the Middle East and Northern Africa.  Arabic is the official language of the 22 the countries that form the Arab league and the 5th most common language globally.

This article will share the history of the Arabic language and offer some interesting facts on Arab culture.  We’ll also help you understand why Arabic is essential for doing business in the Middle East and Northern Africa.

A short history of the Arabic language

Arabic is a Semitic language that is related to both Hebrew and Aramaic.  Historians believe the Arabic language first emerged during the Iron Age, somewhere between 1300–300 BC.  Its name comes from the term Arab, which was used to describe the people living in Mesopotamia (Iraq, Iran, Kuwait, Syria), Anti-Lebanon Mountains (Syria, Lebanon) and Sinai Peninsula (Egypt, Israel).

Modern Standard Arabic (MSA) is similar Classical Arabic, but somewhat easier to learn.  It is the most commonly spoken variant of Arabic and used all across the Middle East and Africa.  It is the form of Arabic spoken by most television presenters, reporters, and politicians.  It is also used in nearly all modern newspapers and books.

There are many other Arabic dialects throughout the Arab world.  They are so diverse that a person speaking one form of Arabic might not be able to understand another person speaking Arabic in a different dialect.  However, both parties could communicate if they use Modern Standard Arabic.

Here are some interesting facts that you may not have known about Arab culture.  They will be useful for anyone staying in an Arabic country for the first time.

#1 — Body language is different in Arab culture
Arabs prefer to shake hands longer but more gently than people from other cultures.  They often greet close same sex friends and colleagues with a hug and kiss on each cheek.

#2 — Business owners like to meet once before talking business
Arabian business owners are very careful about entering into business relationships with new people.  They prefer to have a sit down meeting and get acquainted with a person before talking about business matters.  They must establish a sense of trust with the person they are working with.

#3 — Arabian culture is incredibly diverse
The term Arab describes many different countries with a shared culture, language and history.  However, Arabs are actually a diverse group of people that includes Muslims, Jews, and Christians.  Arabs in different countries dress differently, eat different foods, and have very different traditions.

#4 —Family is very important
Arabs have a strong focus on the family unit.  The patriarch of the family is the most powerful person and has the last say when there is a debate.

#7 — Arabs have been “foodies” for centuries

Arabs are love food and have many celebrations focussed on food.  Many famous Arab dishes are beginning to find their way into Western culture, including shawarma and bakhlawa.

You haven’t seen a grand wedding until you have seen one in Lebanon, Kuwait, Saudi Arabia, or another Arab country.  They have massive celebrations that run for days.

There are many different types of political systems in the Arab world.  Countries including Algeria, Egypt, Syria, and Lebanon are parliamentary republics.  The UAE, Oman, Qatar, Saudi Arabia, Bahrain, and Kuwait are traditional monarchies.  Jordan and Morocco are constitutional monarchies.

About 32% of the people living in the Arab world are between the ages of 15 and 29 years of age.  This is much higher than Western countries, which are dominated by the baby boomer demographic.

The Arab Economy is Growing Quickly

On average, Middle East and North African countries are expected to grow by 3.5% in the coming year.  That is well above the global average.  Countries like Djibouti, Ethiopia and Morocco have become hotspots for economic growth — a trend that is expected to continue for many years.

There is also a significant amount of foreign investment coming into Arab countries, much of it from China and the United States.  The quality of infrastructure is rapidly improving and there are dozens of burgeoning industries in Arab countries.  Many businesses are interested in positioning themselves to take advantage of the growth in the region over the coming years.

If your enterprise is going to conduct business in the Middle East or North Africa, you will need to use a professional Arabic translation service.  This will ensure you can work effectively with governments, suppliers, and other businesses across the region —  completing paperwork, negotiating, and reaching commercial agreements.

Our company provides the world class translation services you need.  We will help your business become established, work with governments in the area and create excellent business relationships.  Our team can also help you create Arabic translations for manuals, articles, and brochures for your business.

nextPeople Behind Your Project! - Noha Hussien