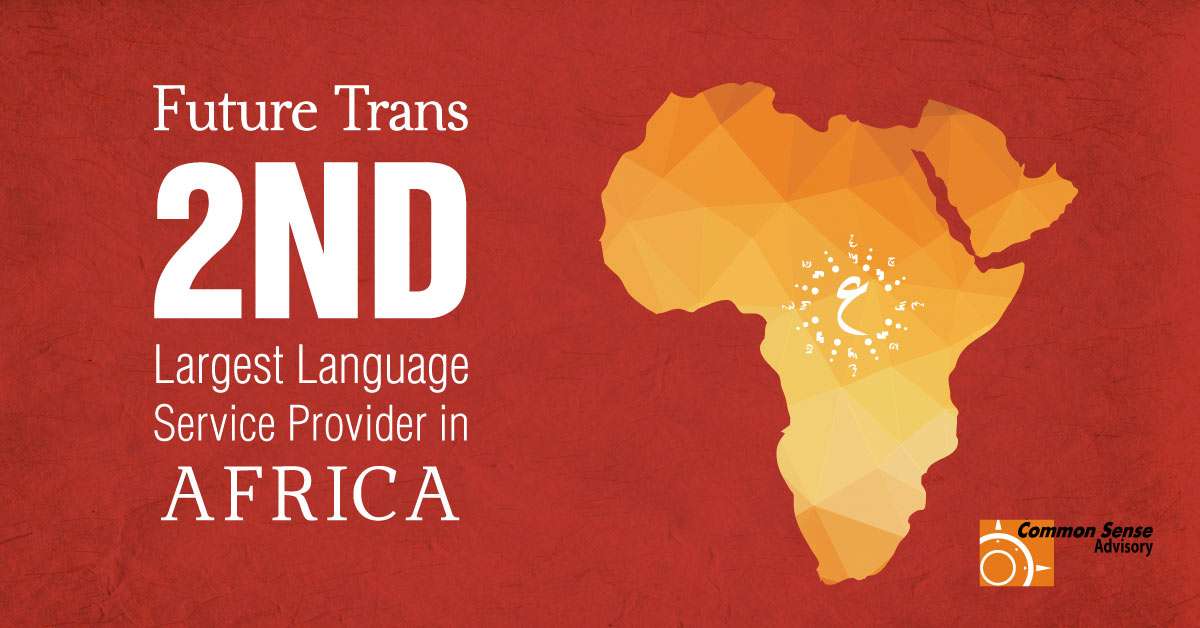 Future Trans Limited (www.future-trans.com) has been ranked second out of the five largest language service providers in Africa in 2015 by Common Sense Advisory for a second year in a row. In the report dubbed ‘The Language Services Market: 2015’, RoundTable Studio, Inc. was ranked first while eLocalize, Arabize for Computer Services and Folio Online were ranked third, fourth and fifth respectively. Future Trans Limited which has 215 employees spread across its 5 offices around the world is rapidly catching up on the number one spot.

Out of the five largest language service providers in Africa, Future Trans Limited recorded the highest increase revenue by 3.08% to post full year 2014 revenue of a whooping 3.25 Million US dollars compared to 3.35 Million dollars in  full year 2013. Arabize for Computer Services was the only other LSP of the five that recorded a positive growth in revenue. The other 3 language service providers posted declining revenues. With only half a million US dollars between the number one and two largest LSPs in Africa, it would not be a surprise if Future Trans Limited is ranked the number one language service provider in Africa the not too distant future.

The Language Services Market: 2015 report (Available at: http://www.commonsenseadvisory.com) is the 11th consecutive annual report released by Common Sense Advisory. The report is increasingly becoming accepted in the translation industry as the official reference point when it comes to the annual review of the translation, localization, interpreting services and technology industry. The Common Sense Advisory team surveyed 860 language service providers from a database of 18,097 firms and analyzed market data from the 2014 calendar year. The methodology used by the research team in this year’s report was refined by the use of a more sophisticated survey software, a greater focus on large and mid-sized LSPs and adoption of a responsive survey.

Future Trans Limited is an ISO9001:2008 certified provider of translation and localization services based in Egypt. Since 1994, Future Trans Limited has served clients across the globe who wish to adapt products, services and communications to the African and Middle Eastern regions. Its success is mainly as a result of its 100% native translators, its use of competent project management teams, its experienced personnel and its policy of client involvement that has attracted big brands. “We are very happy of what we have achieved and this only puts more responsibility on our shoulders to be up to our client’s expectations”, commented the Managing Director of Future Trans Limited Mr. Ali Elsawi on the stellar performance of his company.

nextFuture Trans To Participate In The Annual TCWORLD Conference In Stuttgart, Germany