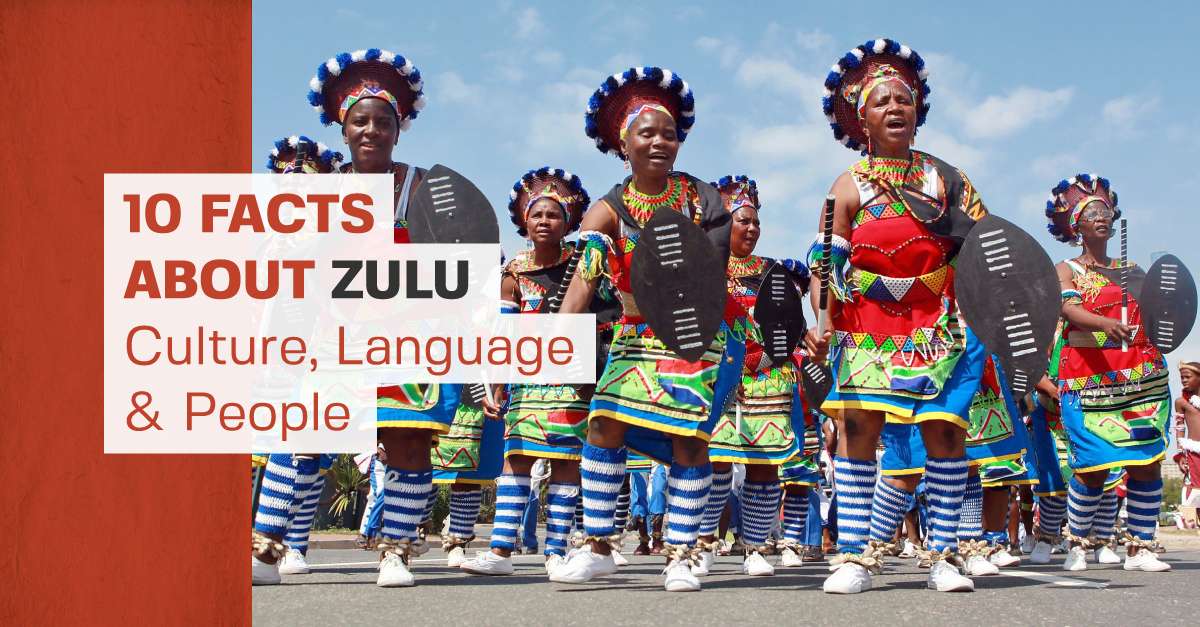 The Zulu Language is known as isiZulu, the language of the Zulu people, with it’s dominant area being the Zulu population living in South Africa. Zulu has around 10 million speakers as a first language, and 95% of these reside in South Africa, as well as over fifteen million second-language speakers. In addition, Zulu is understood by over 50% of the area’s population – making it one of South Africa’s official languages as of 1994. isiZulu is part of the Nguni subgroup of languages, and more than half of the population of South Africa are able to understand it.

Eager to find out more about the Zulu language, culture and people? Read on…

Zulu culture is fascinating, with a long history – and these ten facts will help you see just why!

The Zulu people were originally a clan in what is now known as Northern KsaZulu-Natal. They were once extremely dominant over the region, and are still amongst South Africa’s most prominent ethnic groups.

Zulu language is a fascinating, but the word ‘Zulu’ translates, rather interestingly, to mean either ‘heaven’ or ‘weather’ in the Nguni languages. This shows how language develops over time to take on new significance when translated by other peoples.

The oral history of the Zulus lists eight kings, including the current king, known as Zwelithini Goodwill. The Zulu people became a powerful state in 1818, led by a military leader known as Shaka, who was noted for his significant military prowess and ability to both integrate and mobilize the smaller tribes of the Zulu people. As King of the Zulus, Shaka became immensely significant in building the Zulu tribe into an impressive and imposing empire.

The Zulus came into conflict with the British in 1878, after rejecting an ultimatum to disband their army and surrender control to the British army. This ultimately led to the Battle at Rorke’s Drift at which Zulu forces were significantly depleted, and which saw the Zulu defeated in the later Battle of Ulundi the following year.

The Zulu people were divided into what were known as 13 separate ‘kinglets’, or sub-kingdoms – which fought against one another for several years over the years following their defeat. Zululand was eventually fully absorbed into the British colony of Natal.

With the advance of apartheid, KwaSulu was created for Zulu people. The area was made up of many disparate and disconnected land masses in what is now modern-day KwaZulu-Natal.

Zulu people wear a wide variety of clothing, both in traditional ceremonial use and for cultural celebrations. For everyday use, modern and westernized clothing is worn, and women dress differently to indicate their marital status.

Religion is a major part of Zulu life. Most Zulu people regard themselves as Christians, predominantly belonging to the African Initiated Churches alongside European branches such as the Dutch Reformed, Anglican and Catholic churches. However, other Zulu people retain traditional beliefs which pre-date their conversion to Christianity, and instead favor the worship of ancestors.

Zulu settlements are both rural and urban, with most people living in multi-generational households. Most structures are circular homes build from mud or concrete blocks, with a kitchen at the very center of the house. Urban Zulu people live predominantly in townships from the 1950s and 60s, originally designed to enforce racial segregation. Since apartheid ended in the 1990s, some of these urbanized areas have become more diverse.

The particulars of Zulu history are often unclear, as so much of their history is dedicated to oral historians rather than written down. However this is a strong and world-famous people, who have retained a distinctive character despite many years of change surrounding them.

The Zulu economy depended for many years on livestock and crops, but today vegetables are traditionally grown and maintained as staples of the diet. A dual economy focuses on horticulture, with small-scale trading part of the region’s economic backdrop. Many members of Zulu households earn a living by working in the surrounding cities and smaller towns, though few engage in large-scale commercial activities. However, professional jobs are providing an avenue towards economic development, and the commercial food market is becoming ever-more important for Zulus as they turn their back on their reliance upon an agriculturally-led way of life.  By tradition, the Zulu people took part in hunting, and the women made cooking and storing pots which were sold and traded, as well as weaving industrial arts such as baskets and mats for commercial sale.

The KwaZulu-Natal province is accessible by sea, air and road, making it a desirable location for beginning trade relationships. Whilst not currently part of any major trading relationships, the Zulu region has great potential for companies and independent traders hoping to secure a foothold here.

The translation is therefore very important for ensuring you can crack the Zulu market and ensure a smooth working relationship.

At Future Trans, we are the go-to specialists in Middle Eastern and African languages. We help companies and individuals around the world communicate more effectively and efficiently in both business and everyday life – and understand how important communication is in our fast-paced and ever-changing world. For those seeking to connect with a worldwide audience, there is no better way than to trust your translation task to Future Trans!