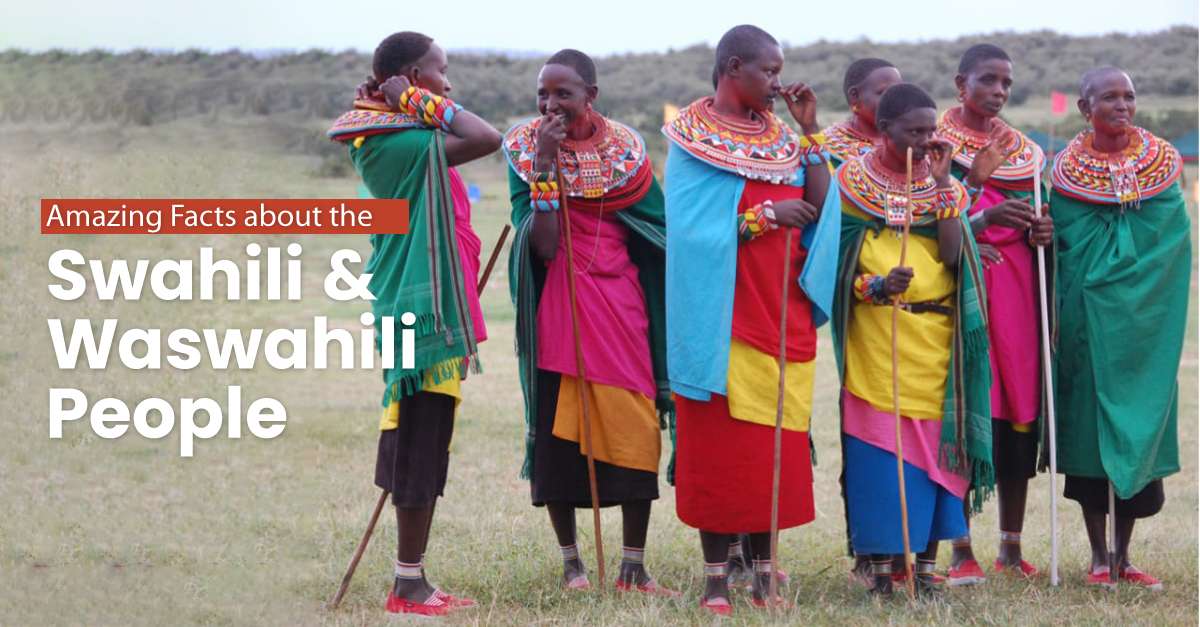 The Swahili people are fascinating, with a rich and exciting culture which remains a mystery to many outside of Eastern Africa, where this ethnic and cultural group originates. From a distinctive language to popular customers and modes of living, here is a complete guide to all you ever wanted to know about the Swahili and Waswahili people…

The language spoken by Swahili people is known as KiSwahili, and it belongs to the Bantu family of languages. The language is a complex blend of Arabic wording and a variety of other languages. In addition, many Swahili people also speak English professionally. Swahili was originally known as Kingozi, but after encountering traders from the Arabic and Persian world, the language changed. The earliest documentation of the language dares to 1711, and these letters are kept in the safe care of the Historical Archives of Goa, emphasizing the regard in which Swahili is held. Some Swahili terms are derived from Turkish, making the translation between the two languages paramount for business people.

Swahili is spoken in areas such as Tanzania, Congo, Rwanda, and Mozambique. There are approximately five million Swahili speakers in the world who call it their native language, and there are an additional 135 million people for whom Swahili is the second language. Swahili is recognized as one of the working languages of the African Union.

The area of Eastern Africa, stretching from the south of Somalia to northern Mozambique, includes around 500,000 people who would be known as Swahili, or by their alternative name, the Waswahili. There is early evidence of settlement by the Swahili dating back thousands of years, and no matter what has happened over the following years, the Swahili have stayed put!

The Swahili people follow the religion of Islam, and their strong faith impacts everything they do. It also has a significant effect upon the Swahili societal structure, family roles, and gender-oriented activities, with an emphasis on segregation of the sexes and a tightly-built family unit domestically. Their Muslim faith also provides significant economic and social ties with the Middle Eastern Muslim community, with shared bonds of similarity.

Swahili’s favor spicy, flavourful dishes which take inspiration from both African and Middle Eastern cuisine. One of their primary staple ingredients is rice, which you will find in many traditional meals. Vegetable-based dishes and sweet teas are also hugely popular, and due to their adherence to Islam, the Swahili people do not eat pork or drink alcohol.

The region in which the Swahili live has been occupied and colonized many times over the centuries, including by Portuguese traders and Middle Eastern slave owners during the nineteenth century, as well as subsequent occupation by British forces. As a result, the Swahili have become well-known as ‘middlemen’ in trading agreements, accepting many different cultures into their area.

The earliest Swahili settlements date back to the 6th century as recorded by history, but they may have originated even earlier than that. It is thought that early Swahili settlements settled around the coast of Southeastern Africa many centuries ago, and archaeologists have found evidence to support the long-term occupation.

As with most peoples and societies, the Swahili people have their own myths, legends, and folklore. Many of them are short stories based on Mohammed’s life and adventures, typing back to the Muslim faith which is prevalent amongst Swahili’s and intended to help guide locals to live more fulfilled lives.

The typical Swahili family home could include several generations all living under one roof, including children, parents, grandparents and even great-grandparents, nieces and nephews and in-laws. This strict family focus is integral to Swahili culture.

Whilst Swahili people live in a number of different ways, permanent housing built from stone in village-like settlements remain common and popular. These areas help to create a sense of community and encourage interaction.

8.  Swahili is a successful second language

Swahili is widely spoken in areas such as Tanzania, Kenya, and the DRC, with Kenya making it a compulsory class for Kenyan students. The language has spread like wildfire, not online as a first language but as a second.

The cultural heritage of the Swahili people is cherished, with local Taarab music (inspired strongly by Arabic music) performed during weddings and concerts in the Swahili community. Popular instruments include keyboards, bass, and drums.

Whilst very few adults play sports either individually or in teams, boys are encouraged to join soccer teams and play this world-famous game in competitions with high stakes for the participants. This is an exciting discovery for local children, meeting up with regional teams, but such events are also rare. Girl’s schools prioritize netball and running and swimming is also popular amongst younger people in the Swahili community.

Relying on the deep harbors which line the East African coastline, the Swahili people have forged a profitable and enduring economy which is largely based around fishing and shipping. Livestock is also sometimes kept. This hospitable environment also makes the Swahili economy thrive in other ways, primarily through growing spices, coconut palms and fruit trees for both local use and shipping elsewhere. Swahili people have also often acted as middle-men between traders when living in urban environments or large villages. This tradition has now all but disappeared but was integral to Swahili culture while it lasted.

At Future Trans, we specialize in high-quality translation services in Arabic and African languages. Our talented professionals have both the skills and experience to help make your translation needs a reality – and our flexible approach ensures absolute accuracy. For a quote, get in touch today.

nextThe Essentiality Of Translation At The World Cup