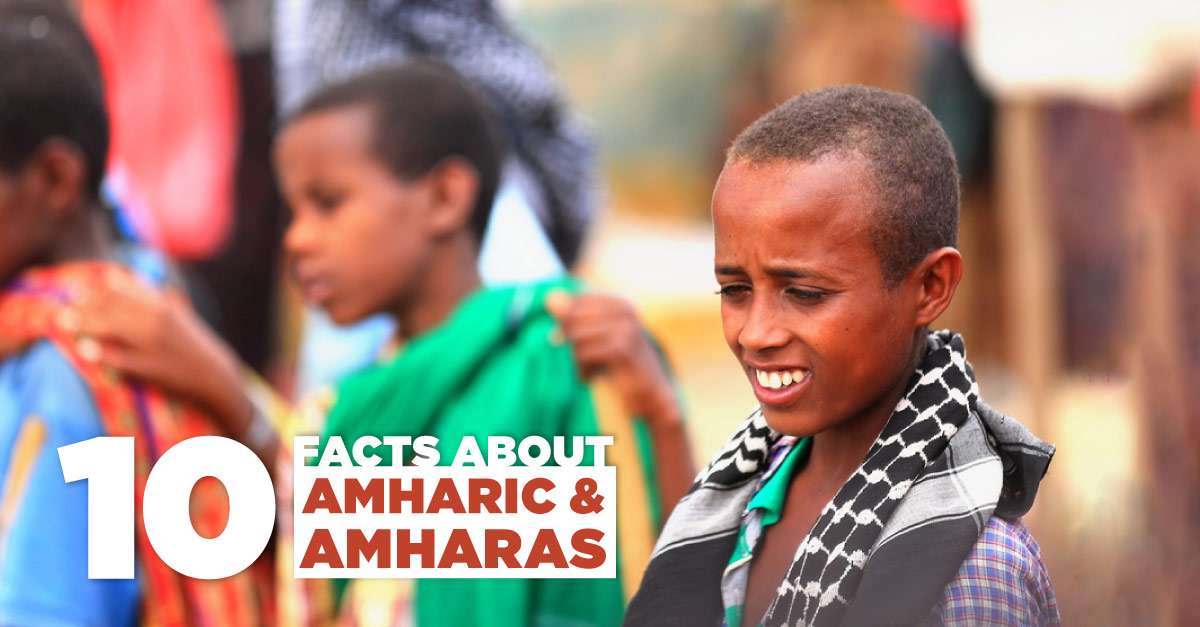 “Treasured within the Horn of Africa, Ethiopia is an amalgamation of history and diversity that has been constructed brick by brick; and at its historic roots lies the essence of its concocting acquaintance with Amharic.”

The factual records of the Ethiopian regime highlights it as a country eminent for its linguistic diversity. Under the Ethnologue limelight, there is an active record of 90 spoken languages of Ethiopia, out of which 88 are dynamically prevalent to date while 2 have faded somewhere down the rugged terrains of Ethiopia.

The proud Semitic-speakers of Amhara exchange a language that treasures the essence of cultural heritage. The language has also secured its illustrious significance as the official dialect of Ethiopia since the 14th century, with a demographic percentile of spoken extensiveness which marks up to 29.3%, lined below Oromo which marks at 34.4%.

10 Facts about Amharic and Amharas!

In the 1960s, Ethiopia rebelled against ruler Addis Ababa, which has left the country without direct access to the Red Sea, hence affecting trade and growth opportunities.

While consuming 50% of it coffee produce, Ethiopia currently exports the remaining 50%. Streets in areas of Ethiopia such Jimma and Hawassa, are clustered with several cafes that emit aromas of thoroughly roasted, finely grinded and briskly brewed coffee beans.

Scientists recently discovered that a new offspring from the Framework of Humankind appeared amidst the fossils deep down in East Africa which resembles our genus and is actually an ancient specie called Homo naledi.

Semitic languages are a mix of interrelated languages such as Arabic, Hebrew, Syriac and Assyriology; these are all major subgroups of the Afro-Asiatic family.

It is used as the official language of the Federal Democratic Republic of Ethiopia, and also of various other states including the Southern Nations and the People’s Region.

The current national flag of Ethiopia is a green-yellow-red tricolored flag with its national emblem in the center. The emblem is a light blue disk which also acts as the coat of arms. The diameter of this emblem is close to half the length of the hoist and it is emblazoned with a yellow pentagram sign.

Unlike the rest of the world, Ethiopia follows a very unusual calendar of its own. The Ethiopian calendar comprises of 13 months, with the 13th month having only five days, or six in a leap year. The order of the Ethiopian Calendar puts Ethiopia almost 7 to 8 years behind the Western calendar. While we are living in the 2018 era, it is only 2011 in Ethiopia.

The Ethiopian traditional costume for both men and women is termed as Gabbi or Netella. Some tribes practice wrapping their body with leather to some extent.

‘Wat’ is the official national dish of Ethiopia. The dish comprises of a fiery stew which is served with injera.

The augmented export rates of coffee per annum is a proof that horticulture stands strong among the fastest growing sectors in Ethiopia while substantially contributing to the foreign revenue of the country.

The Need for Amharic Translation Services:

Translation is a critical career. In a case of committed translation services one requires all aspects including lexical grammar, syntax variations, the knowledge of idioms and slangs, and accurate semantical renditions too. Instead of jeopardizing international business clients and devastating your economic growth, it is always better to recruit an Amharic Translation Service firm who can diligently and professionally help your company with the translation needs of variable dialects.

The growing business opportunities with international markets has encouraged various Ethiopian businesses to seek Amharic translation which facilitates an audience targeted reach within massive populations. Considering our vision to sketch Ethiopia as the future business landscape, Future Trans profoundly took the initiative and still persists to provide Amharic translation services which are meant to enhance the scope of business in Ethiopia other regions of Africa too.

previousAFRICAN STARTUPS AND THE BOOM IT BIDS